The chapel is located at the top of a small hill, 137 meters high, south east of Potries. The Potries Subsidiary Legislation designates its surroundings as protected areas, due to their environmental and scenic value.

A steep path flanked by cypresses shapes the Calvary, and allows the ascension from town to the chapel. It is a cobbled and stepped path with a very accentuated slope. In the upper part, the path is forked and curved until reaching a semicircular square located in front of the chapel building. This square is all surrounded by a masonry railing, with limestone slabs on its top, and it forms a wonderful balcony over the surrounding fields with magnificent views.

It was built by the townspeople under the direction of architect Carlos Spain in the mid-19th century, although there had been a small construction previously, housing the image of Christ since 1799. That is what Fernando Garrigós,  a Piarist and pedagogue from Potries, tells us in a booklet published in the last century, entitled: “Septenary annals and joys to Christ Our Lord crucified in the miraculous image venerated in the Calvary chapel in Potries”. 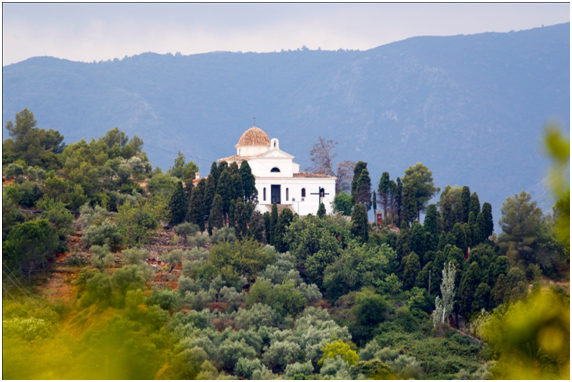 In the chapel we can see, on a small scale, the neoclassical architectural models that extended during the first half of the 19th century following the premises dictated by the Sant Carles Academy in València. The works began in 1854, year in which, according to popular legend, Christ saved the town from a cholera outbreak, and they were extended beyond 1861, since in this year the town council decided to transfer the Christ image to the Sants Joans church in order to complete the chapel. On the facade there is an inscription of 1865, as the possible year of the chapel’s completion.

The building’s floor plan is a 15 meter squared panel, with the proper temple occupying the central part, and two longitudinal sections attached to the sides of the temple. The temple plan presents a Greek cross arrangement inscribed in a rectangle, a sanctum, and an atrium or foyer in the front. Externally, the chapel has a compact aspect, smoothed out by the games that architectural volumes create outside, corresponding to the original distribution of inner spaces.

The facade shows a sober and elegant neoclassical conception, where the symmetrical layout of external openings alleviates its robustness and creates a delicate set of solids and openings, lights and shadows. The naves are covered with barrel vaults and transverse ribs, and the crossing has a cupola over an octagonal drum with pendentives.

Architectural elements dominate over decoration. The paintings inside the chapel are the work of the painter Luís Téllez-Girón i Belloch. It is also noticeable the central niche in the main altar, which houses the image of the Crist de l’Agonia, an 18th century polychrome carving. 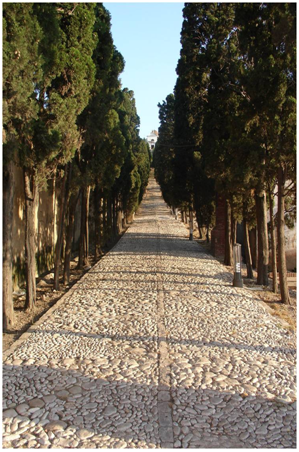 The Calvary ascent towards Potries chapel.

In the 15th century, the first Calvaries with their corresponding Stations of the Cross started to emerge in Europe, although in our land they were mainly developed in the 18th century. These Calvaries reproduced at local level the path Jesus walked during his passion, from Pilate’s palace to Golgotha. Thus, Christians who could not pilgrimage to the Holy Land, could have instead their sacred path at home. The path of the Calvary usually consists of fourteen stations, normally decorated with ceramic panels depicting different scenes of the Passion, where the faithful can stop to reflect and pray.

The Calvary of Potries consists of a set of solid-brick small constructions of rectangular base and about two meters high, aligned with the cypresses that flank the cobbled path towards the chapel. These constructions appear topped with elegant voluted pediments crowned by a cross, all elements made of pottery fired in the brickworks of the Aznar family in Potries. All of them have a frontal ceramic panel describing each scene of the Calvary.

This calvary existed already in the late 18th century, since we have documentary records stating that a new chantry was built in 1799 to house the image of the Crist de l’Agonia. During the Civil War (1936-39) the ceramic panels were destroyed, and they were all replaced in 1954, on the occasion of the Christ centenary, when the stations got their current aspect. 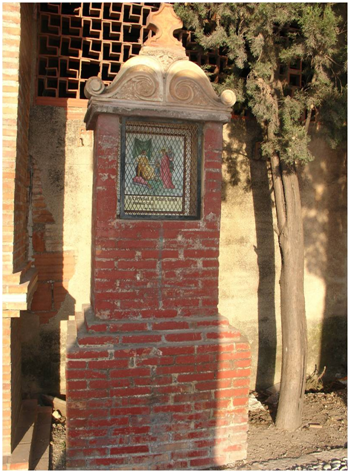 One of the Stations of the Cross in Potries.

Year after year, the neighbours of Potries descend in procession along the Calvary, carrying the images of the Crist de l’Agonia and the Divina Pastora. Potries major festivities begin with this traditional and picturesque Processó de la Baixà (Descent Procession), in the last days of August, although formerly they were celebrated in October. The images remain in the parish church until the last day of festivities, when they are returned to the chapel, in the Processó de la Pujà (Ascent Procession).

Bautista Fuster and his wife Teresa Morant dwelt in Potries at the end of the 18th century. Amongst their few possessions they retained, with that kind of veneration that families felt towards objects inherited from their parents, an alabaster image of the Crist de l’Agonia (Christ of Agony). Bautista Fuster died on June 27 and his wife on November 14, 1799, succumbing to the terrible disease of tuberculosis. Following the customary concerns of the time, they got rid of every piece of furniture in the house, including the image, in order to burn them and prevent an epidemic. 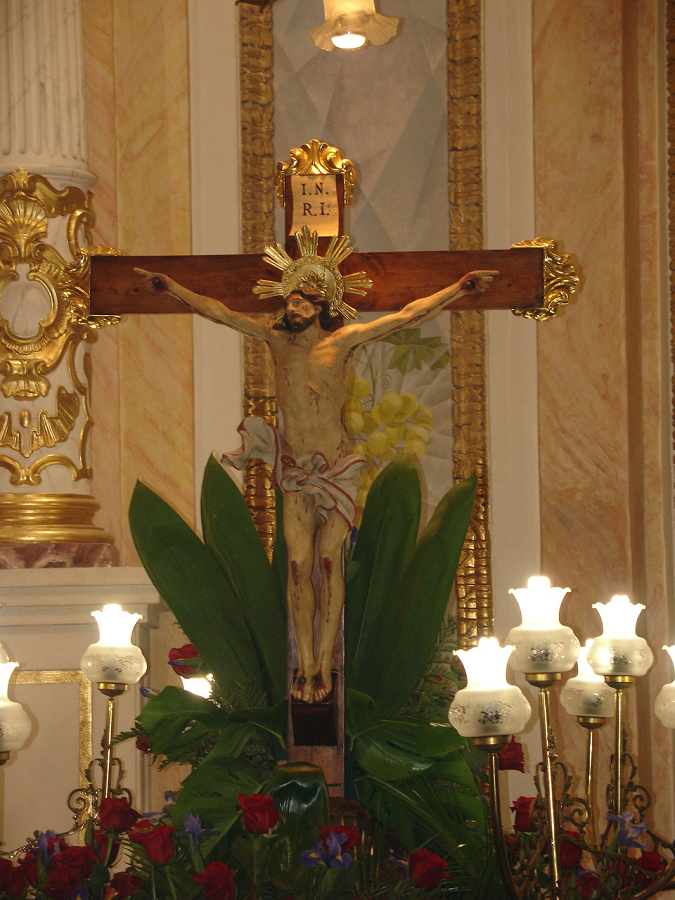 Tomás Jiménez, born in Caravaca and neighbour of Potries, wishing to save this image of Christ, asked the people in charge of the burning. Concerns were so deep, that he only could get the image after quite some time of begging and struggling. The Mayor persuaded him not to take it home, so they finally decided to place it in the last station of the Calvary. Pious Jiménez, helped by his wife Josefa Castillo, managed to build a small chapel to house the image.

The works of the current chapel did not start, however, until the year 1854, a year marked by a terrible outbreak of cholera, a disease that has affected so deeply our region. Despite its topographical situation, Potries was allegedly the first place affected. People began asking to take down the image, and the priest benevolently agreed to this pious demand. After a few hours all the neighbours gathered in the parish church, where an important prayer of penance was to be held. They marched then in a procession through the streets shouldering the image, led by the priest, who carried a ragged rope around his neck. The faithful followed their example, and during the procession expired the last victim. Faith had saved them and the protection of the Holy Image was evident. So the new works began, despite the obstacles presented by the terrain and the general scarcity.

None of this scared the City Hall and its major contributors, who in a meeting held on October 15, approved the formal continuation of the works. Each neighbour became a pawn, and poor and wealthy contributed to the culmination of the work, finishing in twelve years a magnificent work without more resources than the faith of the people and their goodwill. 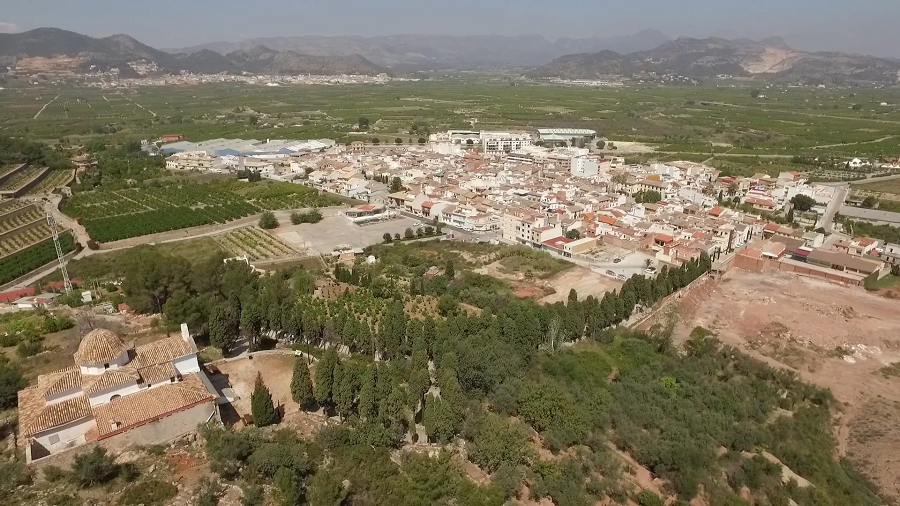 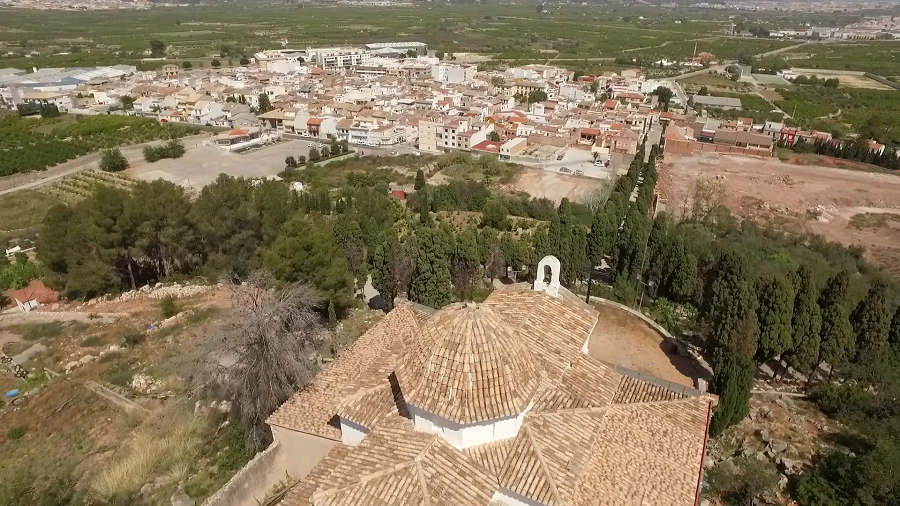